Guns in School - all in favor say Aye

I, like most every other parent in the US, have just received a nice letter from my school's principal outlying the school "security procedures" after the recent shooting. Reading through it makes it pretty clear that:
1. This well meaning man has never spent any time holding or firing a gun
2. He has never been in a hardened facility of any sort
3. Our security procedures would never stand up to a determined assailant.

Now all those namby pamby liberals looking towards gun control as a solution can go to hell in a hand bucket. First off guns are already out there! Lots of guns. Big guns, small guns and all sorts in between. We love guns. Guns. Guns. Guns. Second off - meaningful gun control legislation will never pass. Hasn't. Won't. 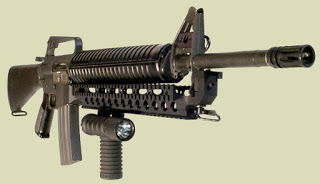 So - what we really need to do it take a look at how to secure our schools. While I'm not a security expert I have spent time in well hardened facilities - most recently a nuclear power plant. I've also spent a fair bit of time around guns. Cleaning, firing and having a good time shooting things. So while I'm not an expert, I am better informed that my well meaning school principal and most liberal wonks.

Step 1: Harden the entrance
Our school entrance is "monitored" by the school administrators. Seriously? A 60 year old former librarian wearing felt clogs? We need to start by making the entrance more secure.

a. arm the receptionist. In a well defended facility first greeters are armed with a loaded side arm, then behind them but within reach are muzzle down safety off M-16's or similar. There is plenty of space behind our receptionist's desk for some effective weaponry. A high caliber hand gun would be hard for her to control so I would recommend a composite smaller caliber semi-automatic with a back up assault rifle within easy reach.

b. reconfigure the reception area. A determined group of assailants could overpower even the best armed and trained librarian so there needs to be a secondary defense system. In an ideal configuration there is a protected area from which the second line of greeters can get line of sight on a group of attackers. From within this vantage point automatic fire can be deployed allowing a single individual to take out several intruders quickly. Our vice principals office is in a perfect location for this. Her office door could be easily hardened and a slot for a weapon could be installed with minimal expense. Her office has no windows so she can easily be used for this purpose. She was a russian literature major and may already be interested in weaponry so training her on automatic weapon tactics may be easy.

Step 2: Build a retreat path
Because even the best prepared entrance defense may be defeated, it is necessary to have fall back strategies and defensive positions prepared in advance. Rolling bullet proof personnel shields should be deployed at every traffic corner in a defensive path towards a common area - in this case the cafeteria  This would allow the school teachers and support personnel to deploy their own weapon and use the shields to fall back while laying down offensive cover fire. These shields are unobtrusive and would not cause any disruption of normal school routines.

3. Harden the perimeter
Here we encounter the expensive part. Strategists have long realized that vehicles can be used as battering arms to go through walls and windows, so there needs to be a defensive perimeter established around the school yard. A break through moat covered with gravel and protected by barbed wire on either side would keep the kids off - while disabling any vehicle trying to break through. This would have the added benefit of encouraging parents to not park in fire lanes or drive on any unauthorized school property.

4. Protect during transportation
Missing in this discussion is that the school bus itself contains children in a densely packed and largely unprotected environment. Many school bus drivers I've met have tended to be older Vermonters - many with former military experience. I would guess that most would welcome legislation requiring them to wear side arms.This would also act as a deterrence for kids who refuse to stop bouncing on the back seats while the bus is in motion.  I would also add a course or two in defensive driving to their yearly license renewal process.

Because it is difficult to shoot accurately while in motion and driving I would also suggest equipping the bus with a secondary shooter armed with an accurate long range rifle. This would also allow the shooter + driver to keep the child under cover during the walk from the bus to the home. It would also discourage anyone from passing a bus while the red lights are flashing.


5. Reconsider
Maybe the concept of gun control isn't too bad an idea after all.
Email ThisBlogThis!Share to TwitterShare to FacebookShare to Pinterest

I really don't care what the fuck you think, so you are probably wasting your time writing this comment.